This morning we packed our bags in Lusaka and made our way over to the western province of
Zambia. We made one stop to visit Lusaka village two hours away that received a well from
Golf Fore Africa last year. What an experience it was. 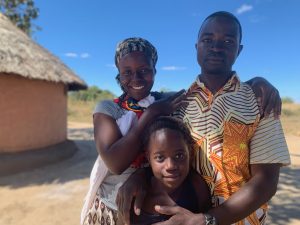 At this village, we met with 28-year-old Lydia. In 2016, Lydia fell into her village’s hand-dug well
while 8 months pregnant. We walked over to this well and it was basically a hole in the ground
about 20 feet deep. She cried out for help, and luckily her sister-in-law heard her and called for
help. With the help of two men, she was able to be pulled out. After her rescue, Lydia
expressed that she felt pain all over her body and was taken to the local rural health center. The
health center then told her to go to the district hospital. At the hospital, it was recommended
that she go into emergency surgery to save her baby. Lydia said she did not remember much
other than waking up from surgery, immediately touching her stomach, and asking, “I was
pregnant, where is my baby?” That was when she was told that she lost the baby. At this
moment, I was behind my camera filming her, and I could tangibly feel the sadness in her eyes
through the screen. It is such a heart-breaking story. After a moment, Lydia followed up with a
sincere thank you to Golf Fore Africa for the new borehole saying, “I know what happened then
will not happen now.” No one should die or risk their lives collecting water.

On a much lighter note, I remember hearing about this village from Golf Fore Africa’s previous
trip in December. Debbie had said that she gave the village two soccer balls, and the women
were so excited they told her they were going to start a netball league. In Zambia, the women
play netball where they throw the ball to each other while the men play traditional soccer.
Well, they weren’t kidding. When we arrived, we saw they had cleared a field with posts on
either side, and a game was in mid-session, referee and all. Watching these women play was
pure joy for me. I reflected on the women and villages I have seen thus far, and as amazing it
has been to see the different things women have done with their newfound time savings from
walking for water, a netball league was a first. What brought on the joy was that these women
were now LIVING and ENJOYING life. They had more time to spend recreationally and watching
the men and 3 generations of families hanging out and spending time together watching the
game on the sidelines was so fun.
As I am writing this blog, we have made it to the very rural western province of Zambia. It was
another 4-hour rocky drive from Lusaka village. I have learned that Golf Fore Africa decided to
start funding water projects in this region because no one else is doing it. I am proud to be a
part of an organization that works to reach those living in hard places where no one else
wants to go. As such, I currently have no wifi or service. Hopefully, I can get this blog out in a
timely manner!

“Never doubt that a small group of thoughtful, committed citizens can change the world;
indeed, it’s the only thing that ever has.” -Margaret Mead