Walking for Water with Camino Jim-Day 34 … Today I will complete my third Camino de Santiago, tired a bit sore but it was great

Day 34 … Today I will complete my third Camino de Santiago, tired a bit sore but it was great

Never thought this day would come because after the second Camino, I could not imagine doing this again but here I am. The final walk will be thirteen miles with a few hills, the last being up to the Monte de Gozo also known as The Hill of Happiness. It has that name because many years ago before the city grew as large as it is now the pilgrims would get their first look at Santiago from this hill and of course they would be happy knowing that their pilgrimage would soon be complete. The monument at Monte de Gozo was built for the visit here by Pope John Paul II. Nearby is the Francis of Assisi monument. I have placed two stones at the monument. One for a friend who just passed away in the last week and a second stone for Robin’s mom Mary, who is having a few age related challenges. 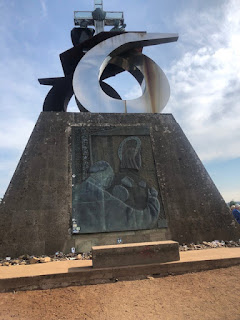 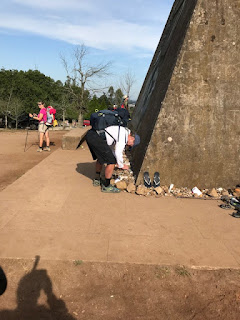 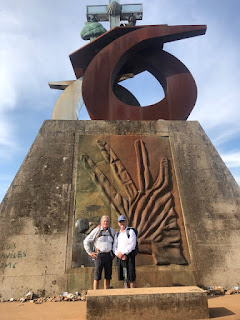 Once past the Monte de Gozo, it’s downhill into the city with the final three miles walking through the city and ultimately into the plaza at the Cathedral. The plaza is where most pilgrims gather to celebrate the achievement of completing the Camino. There is a pilgrim’s mass at 11:00 in the morning and another at 7:00 pm. Both are always standing room only. The retrieval of the Compestella is one last chore. I will most likely delay going to the pilgrims office until Friday morning because the line in the afternoon is always long … as in up to two hours long. 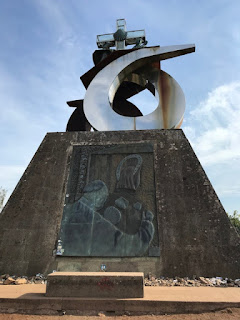 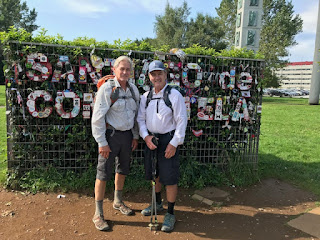 Pat and I made very good time. We left the hotel at 8:00 am and only stopped once for a Coke Zero. The weather was once again terrific. A bit warmer than the last two or three days. We were only about one mile in when I decided to take off a layer and that was a good decision because there was a hill which just quietly kept going up for about a mile and it came early and was an attention getter. Lots of shade made the temperature very manageable. We did see a few familiar faces today and we walked with Candy for about a mile until she needed a break. We will see her for dinner. The plan is to go to a restaurant I have been to four times, most recently a year ago with Robin and two friends, Debbie and Gunther. It was not a Camino related visit. Our waiter a year ago was a guy born in Santiago, but Gus who was raised in Brooklyn. A great guy and lots of fun. In spite of having been to the restaurant three other times I could not remember its name but I could walk there without hesitating. 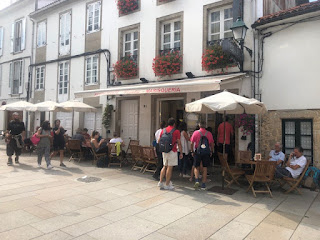 Pat and I have taken photos at the Hill of Happiness and now we are in the Plaza of the Cathedral doing the same. This is the first time that I have seen the Cathedral since the clean up project has been completed. Quite a difference. Pat and I decide to walk down to the Pilgrim office to see how long the line is to receive our Compestellas. On the way we will walk directly past the restaurant and yes, I was correct … there it is. I walk inside, it’s packed for lunch and I see Gus. He actually stopped, looked at me as I call out “Brooklyn” and he came right to me and gave me hug. I think I was a good customer last year and I have a great photo with him from that visit. We chat and I introduce him to Pat. I ask about a table and he tells me I can have the table even if I’m alone because if I’m alone he says he will join me. We are in and I know it will be good and lots of fun. This final day is really shaping up to be a good one. It’s about to get really good. 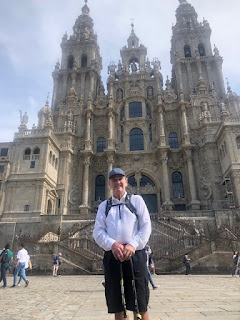 After getting the restaurant taken care of we walk a short distance to the Pilgrim office to see just how long the line is to get our Compestella. We run into Candy who is going to try tomorrow because the line is too long … perhaps two hours long. We press on and when we get there it appears that there are two lines. Pat gets in the line while I go to try and figure out why there are two lines.  I see Cesar in a line and stop to talk with him. He has been in the line for nearly two hours. I ask him why there are two lines and he quickly points out that there is only one line but that’s because the line Pat is in disappears in the building and continue unseen until you reach where Cesar is now. That has to be at least two hours. I head back to where Pat is at the back of the line. I suggest that we come back in the morning because I don’t want to stand in line for two plus hours. 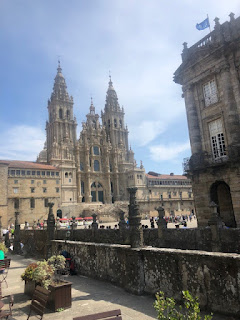 At that moment a large bald guy wearing a Pilgrim Office vest shows up at the back of the line and asks if there are any groups of five in the line. There are three women just in front of Pat who we have never seen before and Pat gently grabs this women’s arm and tells her “hi I’m Pat” we now have five and he calls out to the official that he has five in his group and suddenly we are being lead around the entire line… Pat continues to remind the three women that his name is Pat. In all the confusion when we get to the office with the official we get separated from the completely unknown three women. No problem. Pat grabs this other women standing there with another women and tells her we have a group of four and of course … my “name is Pat.” I don’t have a clue as to what is going on. The official returns and Pat gently grabs him and introduces us as a group of four. The guy looks at Pat and the three of us and gives Pat a document and tells him to fill it out on each of the four. We are in!
Here is the best part. I have been having a credential stamped everyday with Dan Daly’s name on it. Debbie sent me her fathers US Passport info and I have it on the credential so Pat just adds it to the list and we are now a group of five! Mission accomplished .. I will now return with a Compestella showing Dan walking with me on the Camino de Santiago. I can’t tell you just how terrific this feels. I will bring back Dan’s Camino de Santiago Compestella and the stone I have been carrying with his name on it. 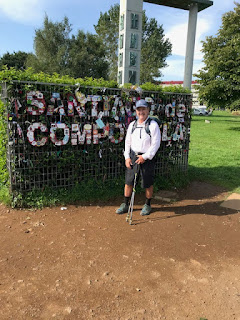 To celebrate we leave the office and stop at the Paradore hotel to sit on their covered patio next to the Cathedral and have a glass of wine. While there we meet a very nice guy who plops down next to us as he has just completed his Camino also from St Jean. Carlos is from Argentina. We have a nice visit with him and get up to leave when the three people sitting next to us stop Pat and ask him if he is a “Penguin”, that’s pretty funny and yes they meant pilgrim.
We are now both on our way back to separate hotels and will meet for dinner with Gary, Margot and Candy. Time to clean up and get a little rest before dinner. More tomorrow. Good night. Buen Camino. SANTIAGO is now complete. It’s been a really great day!
Miles today: 13.3
Miles to date: 502.2
Steps today: 34,398
Steps to date: 1,208,227
Flights to date: 1,290