Walking for Water with Camino Jim- On my way home

On my way home

It’s been nearly forty days since I got on an Iberian flight to Madrid. A lot has happened in that time. Speaking of time I have been on this flight less than two hours and have traveled more than the 500 miles it took me 34 days to walk  to Santiago … perspective. I have been asked by a number of people about comparing the three Camino’s. Seems like a very logical question. I have asked myself the same question a number of times. The question came up at the final dinner and focused on which of the three I enjoyed the most, which was more difficult and so on.
All three were different for a number of reasons. The first was the most exciting and the most fun. On the first Camino everything was new … I mean everything. Around every corner was a surprise of some kind … often the realization that I made a wrong turn, some good and some not so good. I had snow on my first and that will always standout among the three. I met interesting people on all three and yes on all three I met a few I would prefer not to spend anymore time with. On the first Camino I was more connected to a group than the other two with the third being next in that category. In the first I was with a really great and diverse group. Rainer a Camino veteran, Michele an Italian chef with a restaurant in Germany, Nellie and Fernando from Brazil, Emma and Emily among a group of as I called them “the children”, Irish Ann, Big Billy, Bono , The Priest, LILO, the newly weds, Dose Jose’s, two Cops from Los Arcos, the Serrano Family at their restaurant, the Weather girl, Margaret who left because of a serious injury, Brayden the young girl who said I was like her Dad, I carried stones, buried crosses and much more. Tough to top the first Camino.
In the second Camino I was less connected. I really didn’t get attached to any group until well into the walk. Nice people, interesting but not nearly as close as the first. That brings me to the third Camino which was really enjoyable, much more interesting than the second. I met some really nice people I would really look forward to seeing at dinner and on the Camino each day even if briefly. Really interesting people, really smart people who were fun to be around particularly Margot and Gary who I felt I had more in common with while at the same time being so different. I also met a number of people I would prefer not to be around. The Bores, the Sacramento Bores, Suitcase Gary and unfortunately a lot of American’s, especially the younger people who it appeared to me to have become so addicted to their phones that they have almost zero communication skills. Why people travel so far and go out of their way not to meet other people is a complete mystery to me. I also continue to have an opinion about luggage, taxis and transfers which I am sure sounds like I’m being a Camino snob. I’m not because I do believe that if you cannot carry all of things you need and then use a transfer service it’s completely understandable and to those in that category I raise a glass to you for making the journey … walking 500 miles  is tough, backpack or no backpack. My problem is with those who clearly can but just take the easy choice. I don’t think that is what the Pope had in mind more than 1100 years ago when he decreed that if you made the journey, obviously walking, you would be absolved of your sins, he did not have a taxi in mind.
Camino number three also had the best weather by far. Zero rain. It did get hot but you can always find a way to deal with the heat. Snow and rain are far more difficult, I have been in both with the rain in Camino 2 being the worst. As for accommodations they were all similar, weather playing a bigger role in making one more memorable than another. I really struggle with a warm room while trying to sleep. Maria Cruz, her mother and her two aunts was the best little hostel among all three Caminos.  I regret that I did not take a photo and was unable to the next morning. Being able to secure the Compostela for Dan made number three special. Number three also had the added advantage of walking into Santiago with Pat which also the first time I was able to share that moment with someone who also is a great friend … that will always be special. 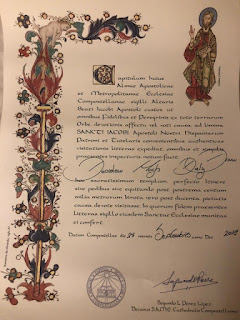 No doubt that the Camino is much more commercial than it was five years ago. The number of people walking from Sarria alone with the transfer crews and buses clearly demonstrates the commercialization of the Camino. The number of new places to stay has grown a great deal especially on the final 72 miles. There are a number of things that have not changed. The Spanish people are just as nice as they were five years, the monument’s and countless churches are the same, carrying stones and other items import to me and others is and I believe will always be a part of the Camino. The opportunity to meet interesting people, the difficulties which must be dealt with, the realization that you don’t really need all that you have and that simplicity just might be better may be a constant on the Camino. The laundry. The solitude and the quite I would hope  Camino will always be there but both are under attack from the growth.
Golf Fore Africa. I will always be grateful to all of the many people who were able to help in our efforts to fund a mechanized well. I came up short but feel really blessed that so many wanted to help. The funds donated will have a life changing effect on an incredible number of people for years to come. Your willingness to help those who have so much less will never be forgotten by me. A special thank you to Ashley and Despina for all of your help in getting the blog and the photos posted. I know you must be thrilled to have this daily chore behind you. I could not have done any of it without your help.
The blog … thanks to all those who took the time to follow me on this walk. Your encouragement and support where a very important part of getting to Santiago. Thank you for coming along with me.
Finally to Robin … always there encouraging me when I was training, never complained about the time it required or the other things it kept me from taking care of and constantly telling me that I would be prepared and that all would be good on my third Camino. Never could have completed this journey without you.