I woke this morning and went downstairs to the carb only breakfast. Truth be told I’m only interested in the coffee. When I step outside it’s really very nice and I’m guessing that the temperature is about 60 degrees … perfect. But I’m not getting ahead of myself because I went online and the weather forecast said the high for the day would be 33 degrees Celsius which equates to 92 Fahrenheit. It’s going to be hot. How quickly will it warm up? I don’t have a clue.
I am packed and out the door of the Guataxiri Hotel and on my way back to the Camino. By the way the hotel is about three quarters of a mile from where I get back on the Camino. That’s okay because I remember that when I last stayed here it was May 2013 and it snowed! That’s was interesting. Which is harder? I don’t know yet but I will soon enough. 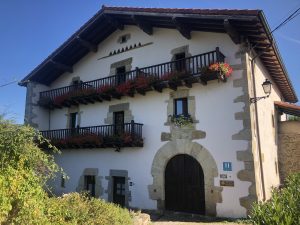 I get back to the Camino and it’s fine. The first eight or nine miles is in and out of the forest with a variety of hills which are both up and down and will get your attention. The last three miles are boring as you walk through the streets on the outskirts of Pamplona. That will have a lot to do with today’s lack of photography. It does not take long for the temperature to rise which in turn calls for a wardrobe change. I see the same dozen or so pilgrims as we all pass or get passed because we take our breaks at different times. I once described it as like being in a NASCAR race … the leader stops for gas or repairs and those behind the leader pass him by while he is in the pits. Soon after the leader leaves the pits and once again joins the race while some of those who passed him while he was in the pits have now stopped for their own pit stop and they are passed. Get it?  Some pit stops are worse than others.
I did see one pilgrim actually lancing a large blister with a knife … did not look good. His pit stop was much longer than anyone else’s so I did not see him again. By the way a blister of that magnitude after two and a half days says something was wrong before arrival … shoes, socks and or training and preparation come to mind. 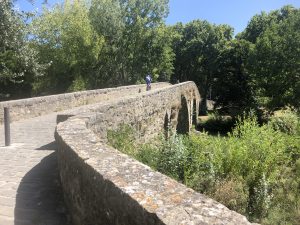 At one point while in the sun with no shade to take advantage of, I know that I am running out of water and the next opportunity for water is about three or four miles away and that’s not good in this heat. Juan the Camino supermarket king to the rescue. I climb this hill and know that I need to stop and drink whatever I have.  I turn the corner into a shady area and there he is … Juan selling fruit and water, ice cold water. Perfect he saves me. I sit for twenty minutes and we try to converse but my Spanish is much worse than his English but we manage. I took a picture of Juan which will be seen shortly. During that stop I find out just how hot it is because when I take off my backpack it’s wet from sitting on my back and everything I’m wearing is soaked … completely soaked. Once out of the hills and the heat I enter the city where the heat still exists but the walk is simply flat and about three miles long. I am not complaining. The passengers and the limo’s need a break and so do I. 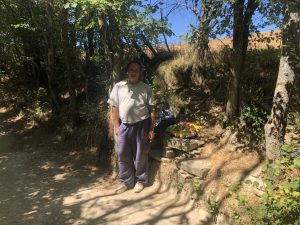 I arrive at my hotel, the same one I was in when I arrived last week and I immediately take care of the laundry. Once again the temperature is very good for drying the laundry. The good news is that I have a room at the back of the hotel which means no one will care about the laundry being on my little balcony. If I had a front facing room overlooking the plaza my laundry would have been a problem.
Here is the first confession … I have now lost the first item of importance. I brought two chargers for my iPad and my iPhone and I now have only one. After I take care of the laundry and take a shower I head to the phone shop and yes they do have the charger I need and it’s only 5.45 Euro. Next on my to do list is the Farmacia to buy a cream which will reduce the soreness in my legs. Once there I explain what I’m looking for and the women immediately recommends a ibufen cream (Advil in a cream) it’s actully a Ibuprofeno gel. I hope it works.
So after all of this it’s time to eat something but it’s only 6:30 and nearly every restaurant does not start serving until 8:00 or later. I go next to cafe next to the hotel under an owning and I order a glass of wine. Never ask for a favor until you have some skin in the game so I ask the waiter if I can order an ensalda mixta and he says he will check. He comes back, brings me my glass of wine and says yes on the salad request. But that’s not what got my attention. When he brought my wine he also brought me an ashtray. I did not ask for one but there it was. When was the last time you sat down in a restaurant and the waiter brought you an ashtray without asking? When was the last time you asked for an ashtray and actually got one? Never.
There were three tables occupied in addition to mine. All three had two women together at each. All six of them were smoking and two of them rolled their own which is not unusual here. In the end I did get the salad. It was good and once finished I headed back to the hotel to write today’s blog. With that I will signoff and say good night and Buen Camino.
Today’s iPhone stats:
Miles today 13
Steps 34,110
Total steps to date: 115,124
Donate Today