Walking for Water with Camino Jim- Day 2. A short walk of 12 miles

Day 2. A short walk of only 12 miles but it’s mostly downhill and it’s covered in Spanish potatoes, aka rocks. Lots of rocks. The walk downhill also means that I will be doing the rock dance with my poles. There will be only a few photos because today’s walk is also in the forest so every photo will look the same … today isn’t anything like yesterday.
The number of steps I will take today will also be much higher than the usual for the distance covered because the steps needed to cover the terrain is higher. Simply walking straight downhill and making sure you don’t cause an injury creates lots of steps. 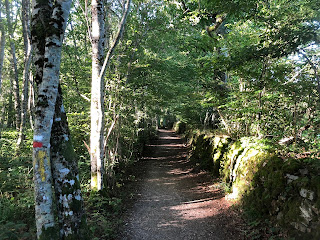 Before I catch up on today I first want to cover a couple of other items. Let’s start with a thank you to all those who have made a donation to the Walk for Water. We are off to a good start and have already reached a total of more than $26,000! Thank you. I want to tell you about two donations which really made my day. Max and Mason are brothers. Mason starts his high school senior year and his brother Max will be a freshman when school starts soon. Both made a donation from their own money and I can only tell you that it makes all of the Walk meaningful. Two young guys recognizing that they can help other young people who have so much less than they do is a real inspiration … thank you Mason and Max.
Catching up on my first pilgrim dinner last night. I met some really nice people at the table I was assigned to. Two brothers from Wisconsin, one just graduated from college and one just completed high school. Really nice young men with great attitudes. Across from me was Allen from Toronto by way of South Africa. There was one other young guy at the table from Italy but I can’t tell you anything else about him. He never spoke to anyone after the introductions and it was not a language issue, he spoke English. He just looked down at his food, ate quickly, got up and left. I saw him on the Camino today and when I said hello he just turned away and ignored me. Shy? I guess so. Why is he on the Camino? I don’t know but it’s not to make new friends. 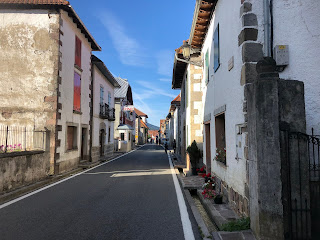 Today’s walk was a bit more than 12 miles and it was primarily downhill and in the forest as I have already said. I arrived at my accommodation at 2:30. It was a nice day but warmed up considerably by the time I arrived. The combination of an early arrival and the warm weather made for perfect laundry conditions. I did that first and everything was dry by 7:00 having hung everything out my window in the sun. 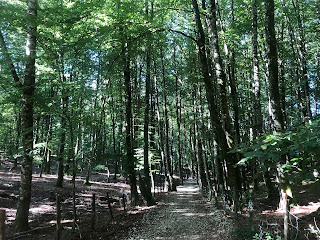 Dinner was early because I did not eat anything on the way, I won’t do that again. I really need to eat something along the way and make sure I take a real break. The salad was terrific, the Paella was not. I ate almost none of the Paella. Dinner including two glasses of wine was a whopping 13 Euro’s. That’s it for now, tomorrow I walk back to Pamplona … a walk of about 13 miles. Good night, Buen Camino.
Today’s totals:
Miles 12.6
Steps 35,500
Total steps thus far 81,014
Donate Today